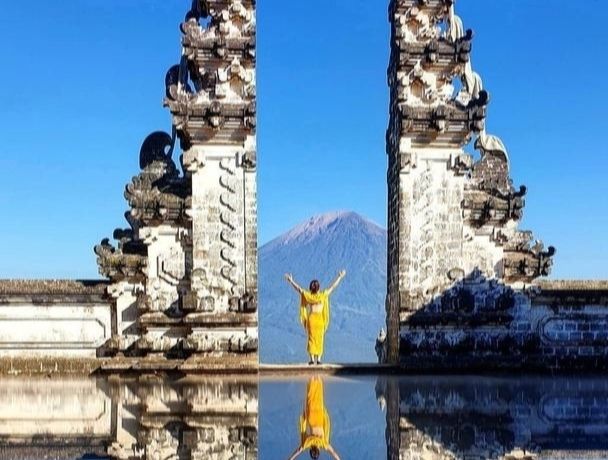 Lempuyang Temple Tour is a Full Day Bali Tour Package to visit Pura Lempuyang or best known as the Gates of Heaven and visit other interesting sites on the island of East Bali. Pura Lempuyang is one of the largest temples on the island of Bali, located on a plateau with breathtaking views of Mount Agung. From the gate of the lempuyang temple we can see an amazing view of Mount Agung. Our tour driver will pick you up at the hotel in the morning and then we go to the lempuyang temple directly, the journey is rather long because the lempuyang temple is located some distance away in east Bali. After getting there we will immediately go to visit the gates of heaven with amazing views, then we will go to the Tirta Gangga park is a water palace recreation to enjoy the view and then we go to the restaurant for lunch Indonesian cuisine, after lunch we continue the tour Lempuyang to visit the last site, Tukad cepung waterfall is a beautiful waterfall with an amazing view, if you want to swim here, don't forget to bring a towel, because we don't provide towels. After that we will return to the hotel with the extraordinary memory displayed on the Bali Lempuyang Tour. Below is an explanation of the Bangkuyang tour, if you have questions about this tour, please send us a message, we will be happy to answer your questions.

Places of Interest will be visiting during Lempuyang Temple Tourr :

Lempuyang Temple is a Hindu holy temple dedicated to the worship of Ida Sang Hyang Widi Wasa, which manifests as the god of Icwara, which is located on the top of Bukit Bisbis on the east of the island of Bali, from here you can see the beautiful view of the largest volcano in Bali. The most famous temple by tourists is by the name of the Heaven's Gate Lempuyang Pura Lempuyang is located on the island of East Bali in the town of Karangasem, Abang sub-district, Tribuana village. Located on top of the Bisbis Hill, a temple overlooking Mount Agung, from this temple you can see an amazing view of Mount Agung. This temple is a sacred place for the worship of Ida Sanghyang Widhi Wasa in its manifestation as Icwara. This temple has a status as one of the "Sad Kahyangan Jagad" so it is clear that this temple is a sanctuary of the universe which is located on the east of the island of Bali. Thus in terms of location, it can be explained that the function of this temple as a symbol to maintain the balance of the universe.Lempuyang Temple is famous for its amazing mountain views, many tourists take pictures at the gate of Bangkuyang Temple with beautiful mountain views. A truly spectacular view is offered at Lempuyang Temple. The name of the Heaven's Gate comes from a tourist spot that takes pictures at the gate of the lempuyang temple against a backdrop of beautiful scenery. because of the beautiful scenery, guests call it a paradise view and a place to take photos at the gate of the Tempuyang temple. So most guests call this place the gates of heaven. 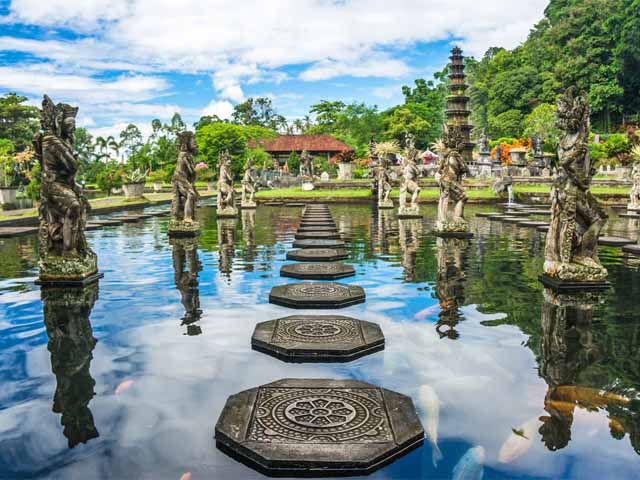 Tirta Gangga Water Palace is one of the interesting places in Bali that was designed and built in 1948 by Anak Agung Anglurah Ketut Karangasem (1887 - 1966), who was the last king of Karangasem. He is an extraordinary man to say the least, not only because he is the architect of the water park but also because he helped build the park. Many people were surprised to find the King in the midst of his lower class workers, working kneeling in mud pools and excavation ponds.The Tirta Gangga Water Palace gardens feature a unique blend of Balinese and Chinese architecture. The water park field (about 1.2 ha.) Consists of three separate complexes, each with a pond and many statues. The lowest level complex has two large pools and a water tower. In the second complex (middle level) Bali water palace is a swimming pool. The third level is the main complex with the former King's country house.Nowadays one can find restaurants and four bungalows in the former hometown of Raja A.A. Anglurah Ketut Karangasem. Building a water park, including the design and work of workers, is King's favorite hobby. Because many of the visitors did not expect this, of course they were surprised to find the King himself working among his workers, standing on his knees in the mud digging the ground.The Tirta Gangga Water Palace is always considered sacred and is regularly used for religious ceremonies in temples. With important celebration days, the Tirta Gangga Water Palace is the destination of colorful processions with offerings, umbrellas, flags and other tributes. Led by a local temple priest, the ceremony is held in spring, accompanied by Beleganjur songs and music, a small gamelan gong-gong group with each musician singing special and different tones on a musical scale, all combined in harmony. 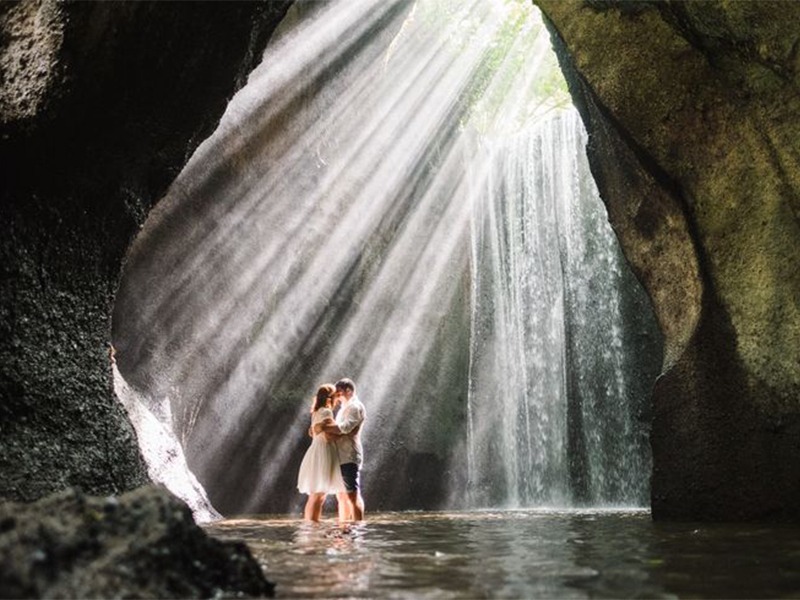 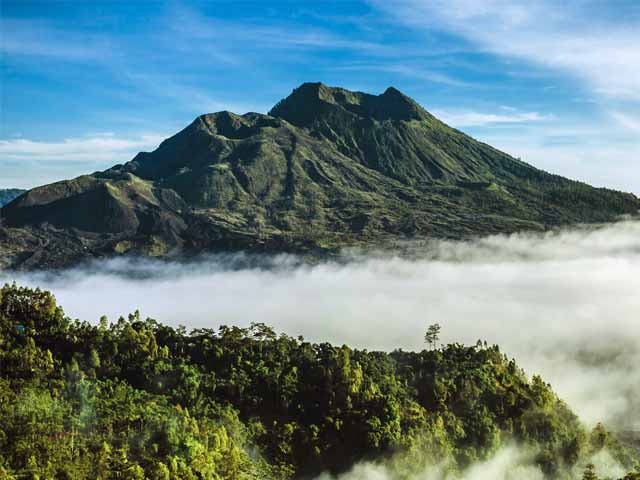